A message to Rob Ward, Director of the Australian Christian Lobby

It is not the job of the Victorian Equal Opportunity and Human Rights Commissioner to promote homosexuality as normal, according to the Australian Christian Lobby.

Homosexuality is normal.  The Australian Christian Lobby are living in the dark ages.  No surprises there though for a bunch of social retards.  The tragedy of the situation is they’re fuelling the fires of youth suicide with their abhorrent morality.

ACL’s Victorian Director Rob Ward said the commission’s role was to focus on issues of practical discrimination, not normalising the lifestyle of 2 percent of the Australian population.

“Australian’s hold a diversity of opinions on homosexuality and it is not the job of the Commission to tell people they have to think any particular lifestyle is normal,” Mr Ward said.

The ACL runs on bigotry, hate and intolerance.  There is very little, if any, good it stands for.  Your organisation’s ‘Christian’ attitudes are sick, depraved and very very dangerous.

I don’t expect you or your organisation to understand this message, but don’t worry, plenty of others will.

ECAJ and The Hypocrisy of Selective Outrage

A bomb blows up near a bus stop in Jerusalem and one woman is killed and 39 injured.  Peter Wertheim, the Executive Director of The Executive Council of Australian Jewry (ECAJ) wrote a letter of condolence to Yuval Rotem, the Ambassador of Israeli to Australia, to convey his deepest sympathy.

In the week prior to the bombing I wrote on how the ECAJ is prolific in writing such letters when Israelis are victims of hate, or in other catastrophic situations such as the Japanese earthquake and tsunami.

The ECAJ also likes to put pen to paper for more vacuous situations, such as the letter written to George Pell on the canonisation of a Catholic woman who has been purported to have performed miracles subsequent to her death.

All it seems to take for the ECAJ to write a letter of outrage, condolence or congratulation is a bomb at a Jerusalem bus stop, a devastating earthquake and tsunami in Japan, or the canonisation of a Christian.

Yet when Israeli youth are murdered in cold blood in Tel Aviv by an unknown gunman with unknown motives, the ECAJ turns its back on the tragedy and stays silent.  I put it that they stayed silent because this was a crime in a gay and lesbian community centre and that the ECAJ are too afraid and gutless to issue a statement of condolence for the death of gay and lesbian youth.

This silence is deeply offensive and it continues to leave a black mark on this organisation that I’m ashamed to say calls itself Australian.  It reeks of hypocrisy and double-standards and exposes the organisation for its moral bankruptcy and spinelessness.

The ECAJ still has no platform position on the welfare of Gay, Lesbian, Bisexual and Transgender (GLBT) Jews in Australia, despite it calling itself a council representing Australian Jewry.  It is clear to me the priorities of this organisation, an organisation with a penchant for selective outrage, are not with the welfare of any Jew, Australian or otherwise, who is GLBT, and if that’s the case, then that clearly makes the ECAJ a hateful and intolerant Jewish organisation.

Another Equal Love Rally came and went today.  Thousands of queer Melburnians and supporters turned up to protest the discrimination that the Gillard Government forces down the throats of all Australians when it comes to marriage rights. 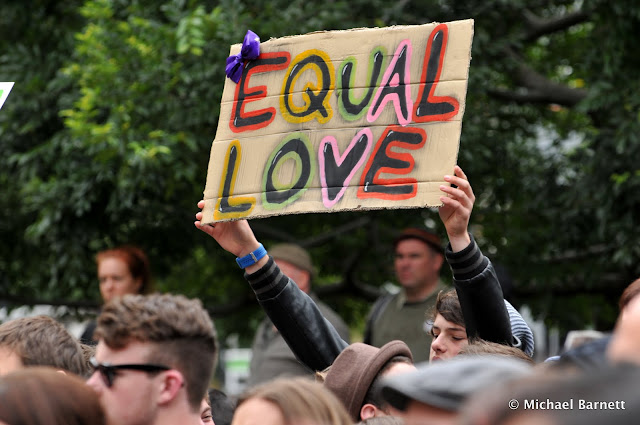 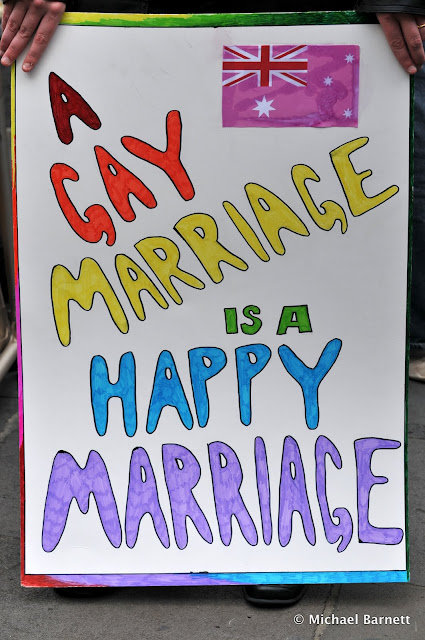 A gay marriage is a happy marriage

It’s time for the Gillard Government to stop pandering to the Christian and other religious fundamentalist bigots and start governing for all Australians, not just the ones that make her the most moist. 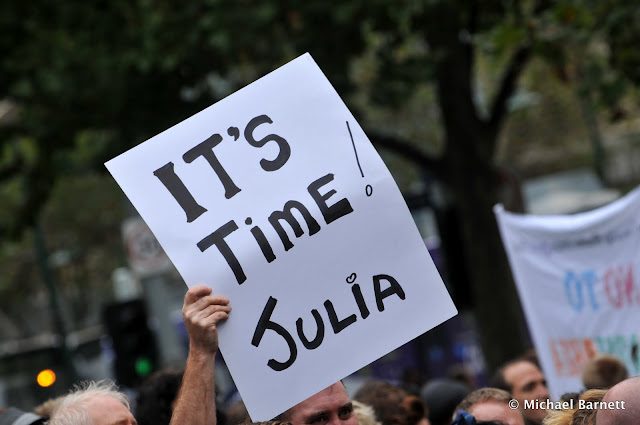 I took some photos of the rally.  Check them out on Picasa and Facebook.

When Michael met Gregory (or “A Delicatessen of Delights”)

I wrote about The Potential Wedding Album (TPWA) project last October.  It’s a great initiative that aims to raise awareness of the discrimination that Australians who are in a non-heterosexual relationship face in relation to Government recognition of their relationship.

To help get this important message out, TPWA have now partnered with Same Same and are running a series of interviews with same-sex couples, talking about how they met.  The first interview in the series is with me and my partner Gregory.  Read our story, and if you’re inspired, contact both TPWA and Same Same and tell your story too.

Victorian Rhapsody: A post-Purim tale of Jewish Community Council arrogance as told by a bohemian queen

JCCV president John Searle today applauded the Victorian Government for its intended introduction of legislation this week, providing for $7,000 fines for adults who misinform children that homosexuality is wrong.

Searle had met with new Attorney-General Robert Clark soon after Clark’s appointment and had proposed this very innovation. He noted that he was extremely gratified with the hearing he had received and delighted that the Government was on the same page and that prompt action has been taken.

According to Searle, the significance of this legislation is that it will educate the community about appropriate behaviour and encourage adults to consider their actions and their duty of care to others.

Searle stated, “It is well established that homophobic intolerance can cause serious harm to developing brains. It is incumbent on older people, particularly those in roles of responsibility, to educate children about human sexuality and also to act as role models in regard to their own behaviour.  If we expect young people to change their attitudes, we really need to focus on adults.”

“According to Suicide Prevention Australia (SPA)[1], gay, lesbian and bisexual people attempt suicide at rates of up to 14 times those of their heterosexual peers,” Searle added.  “This groundbreaking research announced in 2009 sets a benchmark for understanding the extent of this grave problem, all too prevalent in our community, perpetuated by too many adults.”

“SPA cautions that those belonging to religious faiths that promulgate negative discourses about homosexuality are particularly vulnerable to suicide and self-harm.  They also warn that conflicts between spiritual or religious beliefs and sexuality can result in significant psychological dissonance as well as division and exclusion from family, friends and community.”

The JCCV established a GLBT Reference Group some two years ago that has focused on revealing the issues affecting GLBT people in the Jewish community in response to pressure that the JCCV was directly contributing to this problem. This Reference Group has been seen as a whitewash and smokescreen to date but if taken seriously by the JCCV has the potential to actually achieve some useful outcomes.

On the ECAJ, Itamar and a Zionist agenda

The Executive Council of Australian Jewry issues media releases and letters when significant events occur in Australia and around the world.  This week the ECAJ issued one statement on the Japanese tsunami and two on the Itamar shooting, one to the Israeli ambassador Yuval Rotem and the other to the Foreign Minister Kevin Rudd.  So prolific is the ECAJ that going back to the beginning of 2009 one can find approximately 70 media releases on their website.

On August 1 2009 two Israelis were gunned down in a horrific attack in a youth centre in Tel Aviv.  Fifteen other people were seriously injured.  This was a serious event in Israel that was reported extensively in the Australian Jewish press and by numerous other media outlets globally.

The ECAJ ignored this shooting in Israel.  It turned a blind eye to the event and let it pass as if to say the deaths were insignificant and inconsequential.  It would appear that the ECAJ is not interested in the deaths of gay, lesbian, bisexual and transgender Israelis.

Now when I see the ECAJ speak out against the brutal deaths of Israelis in this most recent, abominable situation, it sends me the message that they are shamelessly using these deaths to fulfil their Zionist agenda, and could actually care less about the victims or their family.

On behalf of the Executive Council of Australian Jewry, the peak national body of the Australian Jewish community, I write to thank you and the Australian government most sincerely for issuing a prompt, public condemnation of the shocking stabbing murders of an Israeli mother, father and three of their children late on Friday night, 11 March 2011, in Itamar, south-east of Nablus.

I commend you and the Australian government for your long standing friendship with Israel and for your firm and principled condemnation of these latest heinous murders of Israeli civilians.

I ask the ECAJ to explain why they were silent when Liz Troubishi and Nir Katz were murdered and fifteen of their peers injured in the most horrific of circumstances, at close range by a masked gunman.  Why did these deaths not see the ECAJ issue a statement of condolence to the families and a strong message of outrage and condemnation at the senseless waste of life of the two young Israeli Jews?

The ECAJ appears to be a cold, spineless and heartless organisation, driven by a blinkered Zionist agenda.  The ECAJ does not appear to be an organisation that the Australian Jewish community or wider Australian society can be proud of.

The Commitment Project is a web site that showcases same-sex relationships that have outlasted the median length of an Australian marriage, which is approximately 8.8 years.

Have a wander through the pages and enjoy the stories and photos you’ll find there.  Some great examples of love, against the odds.  While you’re at it, connect via the Facebook page for the project and help pass the word on.

I hope I can one day be a part of this project.  I’ve got another 6 or so years before I’m eligible.  I am confident that Australian law will allow same-sex marriages by then though.