Colin Rubenstein, setting his Zionist agenda for the ABC

In this week’s Australian Jewish News the Australia/Israel & Jewish Affairs Council executive director Colin Rubenstein said the ABC should not have invited Ilan Pappe to appear on Q&A:

“The decision by Q&A to frame a program around an individual whose single claim to notoriety is his defamation and demonisation of Israel – a longstanding advocate for Israel’s demise and a man repeatedly caught misusing historical sources to push his openly declared ideological vendetta – is an extraordinary example of contempt for the intelligence of viewers,” Rubenstein said.

I’d like to put it to Colin Rubenstein, and those who concur with his point of view, that the viewers of the ABC, myself included, are intelligent enough to make our own minds up as to whether the ABC should have invited Ilan Pappe to appear on their show and that we don’t need pro-Zionist moral guardians to make our minds up for us.

If Colin Rubenstein wishes to censor the ABC he can take himself off to somewhere like China, North Korea or Iran and open his own state media outlet and not invite Ilan Pappe, over there.  In the meantime, in Australia, he should respect the independence of the ABC and the intelligence of its viewers.

Best check with the Jewish grammaticists over at Galus Australis.  They seem to be authorities on the use of the English language when it comes to sexual orientation.

Malki, please refer to GLBT people as ‘GLBT people’ in future and not as ‘GLBTs’. We are people, just like you.

Despite your protest to Malki, I’ll still not mind if you call me a “Jew” rather than a “Jewish person”.

The word ‘Jew’ is a noun. The acronym ‘GLBT’ is commonly used as an adjective.

It would be a start if the people who defined themselves by excluding everyone else would accept some responsibility for the situation we find ourselves in.

Frosh,
You know many GLBT’s refer to themselves as ‘GLBT’s’. It just means gayS, lesbianS, bi-sexualS and transgenderS.
It something we do in English. Its called using a word in plural form.
Its quite silly that some people find plural forms to be so offensive.

Ant Frosh talks about his wife "taking out the trash"

Which refers to these two conversations on their blog (here and here): 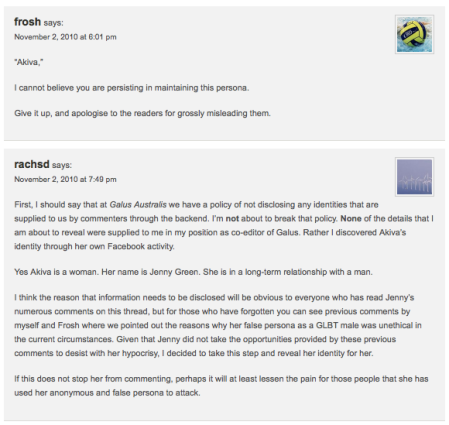 Outing someone at the best of times is a deplorable act of cowardice.  Gloating about it and referring to them as trash is simply degrading and about a low as it gets.

A public apology to ‘Akiva’ is required.

A little “thank you” goes a long way

One of life’s smaller lessons learnt is that when someone gives me something or does something for me I say “thank you” afterward, as a sign of appreciation.  It’s courtesy, and I know it makes a difference.  Similarly if I do someone a favour or give them something, I expect a sincere “thank you” in return.  It goes a long way in my books.