A fruity message highlighted the discrimination: 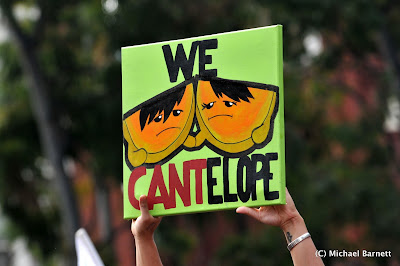 Ernie & Bert were planning their wedding in New York (and Colin was planning his wedding to a handsome police officer): 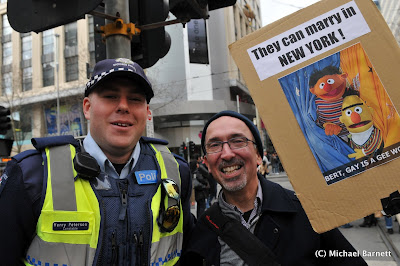 While Ernie & Bert want to marry in New York, Colin has his eyes on a handsome policeman There were thousands of people there: 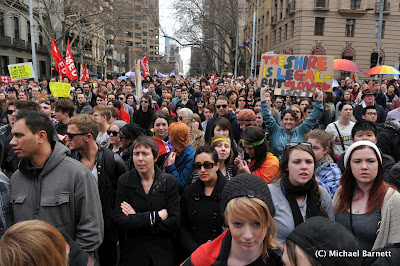 Two gorgeous guys got illegally married to each other: 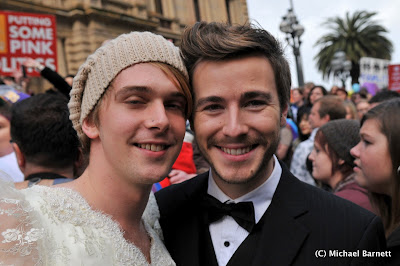 Enjoy all the excitement of the day – photos on Picasa and Facebook.  View all my Equal Love Rally posts here.  Please contact me if you want to use any of my photos from this event.

Magda Szubanski was guest of honour at the Equal Love Rally on May 12, 2012: 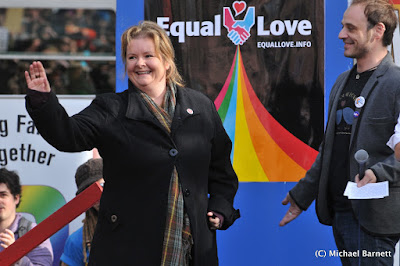 Carl Katter was there too: 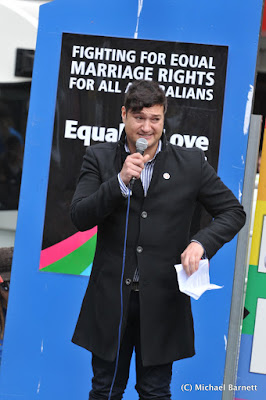 Adam Bandt, Federal MP for Melbourne and Deputy Leader of the Australian Greens returned to speak out for equality: 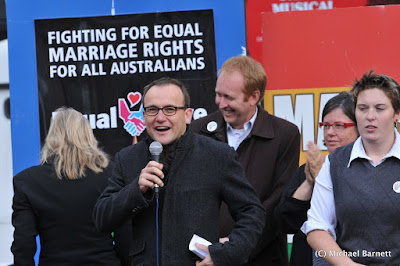 Dear Julia, my partner Gregory and I have been in a relationship since November 2008. Gregory is a father of two. We want the right to get married. Why does the government not allow us to get married? 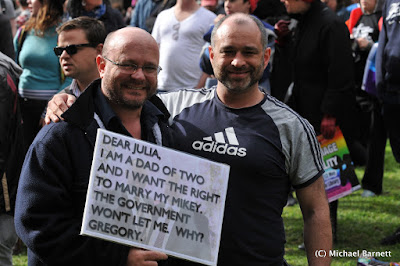 Julia, why can’t Gregory and I get married?

Even gay zombies want to get married: 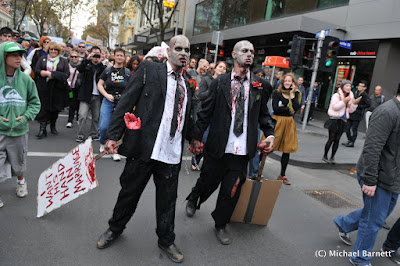 Even gay zombies want to get married

Enjoy the excitement of the day – photos on Picasa and Facebook.  View all my Equal Love Rally posts here.  Please contact me if you want to use any of my photos from this event.

What can gays do in New York that they can’t do in Australia?

Tracy Bartram was guest of honour: 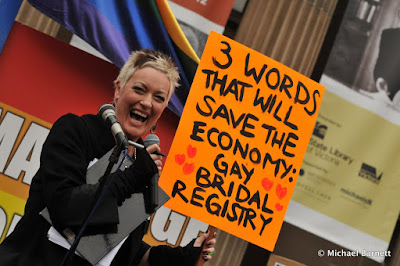 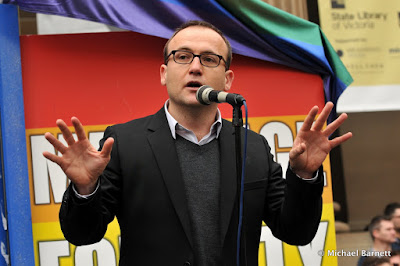 There were even drag queens and a hot dancing boy (because sequins and lip-sync are necessary to help legislate away the hate): 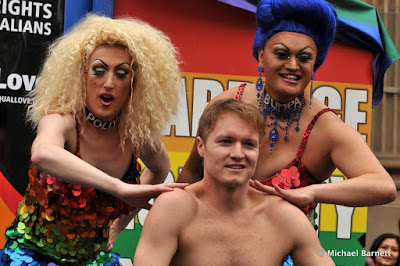 I seem to be a recurring feature at these rallies, and so does my partner Gregory.  We’re not married, but we are in a registered relationship in the state of Victoria.  We’ve been in a relationship since November 2008.  Why can’t we get married Julia? 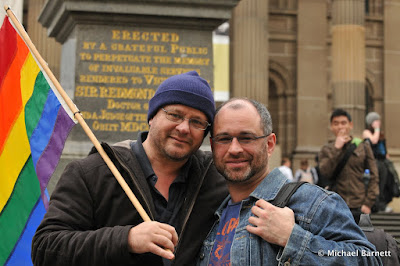 My partner Gregory and me

Oh yeah, and in case you didn’t know, same-sex couples can now get married in New York (but not Australia!): 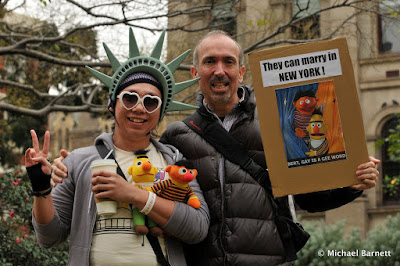 Back in March I took some pics, and last Saturday, August 13 2011, I took some more.  Enjoy the excitement of the day – photos on Picasa and Facebook.

Adam Braitberg was part of the Equal Love Rally in Melbourne on November 20, 2010.  I took a photo of him and a friend Tyger-Lee Baise, both proudly displaying their blue Habonim Dror shirts, and showing their support for equal human rights for all Australians.

Because they participated in this rally, as part of a Jewish organisation, they came under attack on the AJN Watch web site.  You can read all about it in my previous blog.  Keep an eye on the comments on the AJN Watch site though, as the conversation continues (to dismay).

Yesterday Adam’s father, George, made a profound statement, and in doing so has moved me deeply.

George said…
I am Adam’s father. To those that see fit to judge someone you don’t know or have ever met, I ask you to explain what right you think you have to behave in this manner. As Jews we are well aware of the history of bigotry, slander and false accusation. To judge my son, without knowing him is perpetuate the belief that “difference” in itself is an excuse for hatred. How ashamed am I of Jews who show such intolerance. I love you Adam. Dad
Thursday, December 16, 2010 11:17:00 PM

Adam’s father is a wonderful role model for showing unconditional love and acceptance of his son Adam.  He is an example to every member of the Melbourne Jewish community and the wider Australian society on how we must bring up our children.  It is only with this positive and supportive attitude that we can start to overcome the horrifying level of suicide, self-harm and mental health issues that (religious) intolerance afflicts on Australia’s same-sex attracted youth.

Thank you Mr Braitberg.  You and Adam have demonstrated far greater leadership ability and are infinitely better role models than those who currently claim to speak on behalf of the Jewish community.  They don’t need a ‘GLBT Reference Group’ to arrogantly identify and address “our issues”.  They need intelligent and compassionate leaders like you.

Equal Love Rally. We’re all equal. Get over your intolerance.

Today was another Equal Love Rally in Melbourne.  It was held outside the State Library of Victoria on a glorious sunny Melbourne day.  Lots of people were there.  Lots of ordinary, everyday, normal people.  There were some great speeches.  There was a lot of inspiration, love and acceptance.

In this world there is a lot of intolerance, ignorance and fear around people who don’t conform to some rigid stereotype of “normal”.  Sadly these people lack the compassion, humanity and maturity to understand that their bigoted, homophobic and hateful attitudes are wrong, outdated, and plain old mean.

When will these people grow up and learn to love?

Check out my photos from the Equal Love Rally today on Picasa and Facebook.