Tonight my partner Gregory and I got married.  We made a public declaration, affirming our love for each other.  We were dressed in our sartorial best, freshly shorn and groomed like two gay blades. 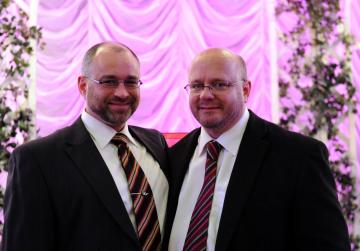 We had a bucks night the week before and we even had a lovely party afterward, with wonderful catering.  Oh, and there were bomboniere.

I have to be honest with you.  It wasn’t a real wedding, and we didn’t really get married.  But yes, there was a wedding, on TV, in which as reality actors, we pretended to get married.  You see, currently in Australia two men like Gregory and me are not allowed to get married to each other.  That’s gay. 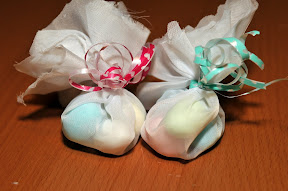 But despite the mean-spirited Howardian legalistic prohibition on us blokes tying the knot, the lovely team at Adam Hills In Gordon St Tonight decided to throw us a big ole gay wedding.  And throw us a wedding they did.  There were photoshoots, interviews, a special bucks and hens night (coz there were some chicks as well as some blokes wanting to tie the knot), the main event, wedding presents and even a cocktail reception afterward.  Oh, and there was live entertainment too, although it seemed more like it had been freshly exhumed.  And all at tax-payer expense.  Thank you tax paying Australia, and especially Jim Wallace and Bill Muehlenberg, coz I know how much you hip dudes would have wanted to help us celebrate our homosexual union.

If you know me you’d know that I’ve been very activisty in raising awareness of the discrimination that a not insignificant section of Australia’s population faces when it comes to equality in relationship recognition.  I’ve protested (peacefully) at the Equal Love rallies.  I helped my partner campaign as a then-candidate for the Secular Party of Australia in the 2010 Federal Election (because the party supported marriage equality).  I manage the Proud to be a Second Class Australian Facebook group, with a moniker aimed to draw attention to being treated as second class by the Federal Government.  I give money to Get Up! to campaign for marriage equality.  I’m even a paid member of Australian Marriage Equality.

I don’t think I could possibly make it any clearer that I am trying to achieve a turnaround in the marriage legislation in Australia, to remove the discriminatory words that, for no good reason, prevents me from marrying my partner.  That said, we are already living in a legally recognised relationship under Victorian state legislation because we entered a civil union on April 21, 2010.  Sadly though this relationship is only valid in Victoria and carries no legal weight anywhere else in the world.  It’s also not the same as being married.  You might ask why?  Well, quite simply, because it’s not a marriage.  It’s a civil union, or a registered relationship, or a domestic partnership, or whatever else you want to call it, but it’s not a marriage.

Do I want to get married?  Good question. Yes, and no.  To be honest I don’t really know.  Parts of me want to get married and then go and say to those who don’t believe in equality “See, two poofs can now get married, so stick your bigotry…”.  More than that I want to be a positive example of a successful same-sex relationship, to help empower those in their closets, and say “Gregory and I are two men, married to each other.  If we can do it, so can you.  Be proud of who you are”.  Other parts of me simply don’t like the old-fashioned, out-dated notion of marriage that binds two people together, until either one dies or they get a divorce.  Camels and goats must be fatted and dripping in gold chokers if you must give a dowry.

I am committed to being in my relationship with Gregory, and irrespective of any piece of paper or legal status, we love each other very much and want to be deeply interconnected in each other’s lives.  I know what we mean to each other.  We’re special in each other’s eyes and hearts and that’s something legislation can’t change.  But it can make us equal in society, and that’s what we both want.  Equality.  Incidentally, some narrow-minded folk believe that two gay men can’t be equal in society, and therefore shouldn’t get married, because we can’t have children, or that even that we’d be depriving the children of a mother, and therefore bad parents, blah blah blah.  With two well-adjusted adult children under his belt Gregory certainly isn’t looking to have any more.  And we are equal in society.

Now, around the middle of February this year Gregory sent me an email asking if I wanted to be in the Adam Hills IGST mass gay wedding.  I pondered the idea and then without consulting Gregory I sent in an application to be part of the wedding.  I thought that if he was tempting fate with asking me to be part of a TV wedding, I’d accept the challenge and commit him, and me, to being part of it.  🙂

We were accepted by the IGST team and told there were going to be a number of events over the coming weeks culminating in the TV wedding.  It was becoming exciting.  A bit like a real wedding.  Photos, what to wear, bring some food, look good, get hair cut (#2 clippers on each other…), vajazzle, you know, the usual stuff.  There was a sense of anticipation.  A bit like a real wedding.

We told our family and friends about this.  They got excited.  Very excited.  Colleagues were talking, even those who were usually a little uneasy with the “gay” thing were getting excited for Gregory and me.  I was even asked by a colleague, who only last year told me he didn’t believe in gay marriage, whether I was going to invite the guys from work to a bucks night.  After a coffee and a chat he even seemed comfortable with the notion that marriage equality might have some merit in treating people on an equal basis.  Yes, equality is about being equal.

Gregory told me many of his colleagues were having kittens because he was getting married.  They really couldn’t contain their excitement for him.  And on Facebook I was getting a variety of well-wishes from people who wanted to know when “it” was and then wished us all sorts of lovely things in anticipation of the big day (or is it the big gay…?).  Things were abuzz.

I really started feeling like I was getting married, for real.  When we got civil unionated in 2010 people were happy for us, but not to the same level as they had become around the IGST wedding event.  It was as if the notion of marriage conveyed a special status, over and above any other sort of life event or relationship recognition.  Funny that.  Because it does.  It’s the ultimate in happy.  And it’s the ultimate in silly too.  Just look at the amount of money people throw at weddings.  It’s big business.

Quite remarkably though, and I think this is about as significant as it gets, Gregory told me that tonight, on his way home, a dear friend of his told him that he had decided that it wasn’t so bad after all if two blokes wanted to get married.  He threw his religious belief coins up in the air and they both landed queen-side up.  And the world didn’t stop, and the sky didn’t fall in.

People have been talking because of the IGST wedding event.  They are talking about how lovely it is to see two guys getting married, and two gals getting married, and they cried and they were happy.  These people and conversations are actually changing attitudes and opening minds.  Oh, and my Facebook account has melted with all the wonderful messages from people who saw us on the TV and loved that we were getting married.  I have never ever had a bigger response to anything on my Facebook page than to our participation in this event.  It’s really quite overwhelming, and humbling.

So we got TV married tonight, in a very happily-ever-after way.  Two handsome princes rode off into the sunset and shared a bit of love around the place, and hopefully they made a difference.

PS.  If you missed the TV coverage of this event, you can catch up on it here.

PPS.  If you want to tell the Australian government why you support marriage equality, you can make a submission here.  It only takes a few minutes.  Be quick as the deadline is April 2, 2012.  You can read other people’s public submissions on the site, to get an idea of what they are saying.  Speak from the heart.  It need only be a few paragraphs.  Thanks.

This entry was posted on Thu, Mar 29th, 2012 at 1:27 am and is filed under Humanity, Love. You can follow any responses to this entry through the RSS 2.0 feed. You can leave a response, or trackback from your own site.

10 Responses to Now that I’m married…

Leave a Reply to A Friend Cancel reply