International Holocaust Remembrance Day is January 27.  The Jewish Holocaust Centre in Melbourne, Australia held a commemoration for this solemn occasion on Thursday January 25, 2012 (to avoid a clash with the Jewish Sabbath).

In keeping with the tradition of having a representative of the GLBT community to attend the commemoration, Colin Krycer of Aleph Melbourne accepted the invitation to light a candle in memory of the tens of thousands of homosexual men who were murdered at the hands of the Nazis. 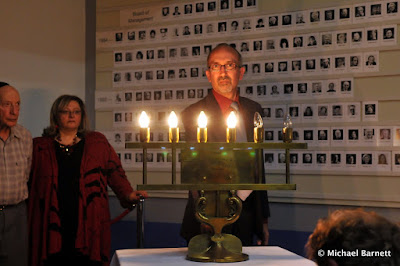 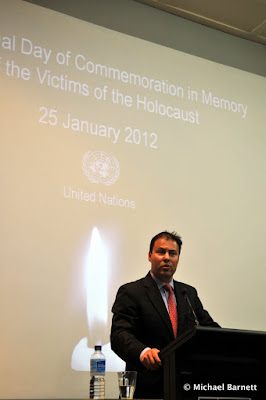 I feel compelled to express my reservations with the selection of Josh Frydenberg as keynote speaker at this event.  My reservations stem from the fact that Josh Frydenberg wishes to deny equal rights for homosexual Australians and calls for a second-class status for the registration of same-sex relationships.

My view is that marriage is a unique relationship between a man and a woman. It is much more than a simple debate about preferred terminology.

Relationships between same sex couples are equally special but nevertheless by definition different.

These relationships are to be respected and valued for the love that they bring and the families that they build. However, the term marriage should not apply.

Civil unions, however, should be an alternative.

I know many people in our community, particularly those younger than me will not agree with my view on same sex marriage.

I hope they respect my view as I do theirs.

In the Holocaust homosexual men were denied equality and treated as lesser citizens, with reduced rights and status.  There is no place for any discrimination against homosexual men and women in Australian society.

I ask Josh Frydenberg to understand this reality and to join the increasing ranks of Australians who understand that marriage equality, a definition of marriage that does not discriminate on the basis of gender, is in the best interests of all Australians.

This entry was posted on Thu, Jan 26th, 2012 at 11:15 pm and is filed under Humanity, Politics. You can follow any responses to this entry through the RSS 2.0 feed. You can leave a response, or trackback from your own site.